Patney is a small rural village in the heart of the Vale of Pewsey in Wiltshire and within the North Wessex Downs Area of Outstanding Natural Beauty. The Marlborough Downs lie to the north and Salisbury Plain to the south with the River Avon flowing gently along the southern border of the village. The market towns of Devizes (6.5 miles to the west) and Marlborough (13 miles to the east) together with the cathedral city of Salisbury, only a 40-minute drive away, provide excellent

local facilities. Two of the Wiltshire white horses are visible as you look north – to the north-east the one at Alton Barnes was carved in 1812 by a local farmer, and to the north-west, the youngest near Roundway Down in Devizes, was carved out to celebrate the millennium in 2000. Patney has a small village green and open paddocks at its centre and is surrounded by agricultural land which is mainly given over to arable and sheep.

Patney has no school, shop, post office or pub. The village is designated as “open countryside” in the Wiltshire Core Strategy adopted in 2015.

The village has existed for over 1000 years with the name ‘Patney’ in evidence as early as c.963. The name is thought to derive from ‘Peatta’s well-watered land’ and has various spellings: Peatanige, Patneye, Peteneia and Pateneye.

1086 the land was held by Saint Swithun’s, Winchester. There is no separate entry for Patney in the Doomsday Book as it was included in the estate of Alton Priors. In 1541 the manor was granted to the new Cathedral chapter at Winchester who ceded it to the crown in 1547; it then went through various ownerships until it was sold to the Earl of Radnor.

In the early 13th century, Saint Swithun’s priory held a small estate of about 16 acres which also went through various ownerships until 1828 when it was bought by the Earl of Radnor and merged with the manor estate. Later, the rector’s share became Rectory Farm, the Earl of Radnor’s became the basis of Manor Farm, and the two farms were consolidated. In the early 20th century the Radnor estate was divided into Manor Farm (now Woodside Manor Farm) with 216 acres and Home Farm with 256 acres – both were initially let before being sold in 1919. They continue to be the two principal farms in the parish.

St Swithun’s Church had its first rector in 1307 and another 49 followed over the next six centuries. One of the rectors, a Rev. P Jackson, was a blacksmith who made a clock, but instead of putting numerals on the dial he put the words ‘Patney Rectory’. This can still be seen today. The church continued to be used until 1991 when the floor caved in, resulting in its closure and subsequent conversion to a private house. In 1862 an extension to the 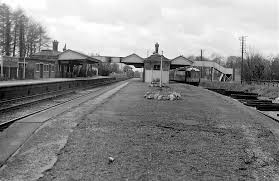 Berkshire and Hampshire railway was built, the road to All Cannings was diverted over a bridge (it is still there today) and the Patney and Chirton railway junction was built to the west of the bridge. The station eventually had four platforms and played an important military role particularly during the First World War with its proximity to Salisbury Plain. The GWR line from London to Penzance is still very much in use but the station was closed in 1966 and the only remaining traces are a footbridge (still part of a footpath), a water tower and, if you look carefully, part of a platform.